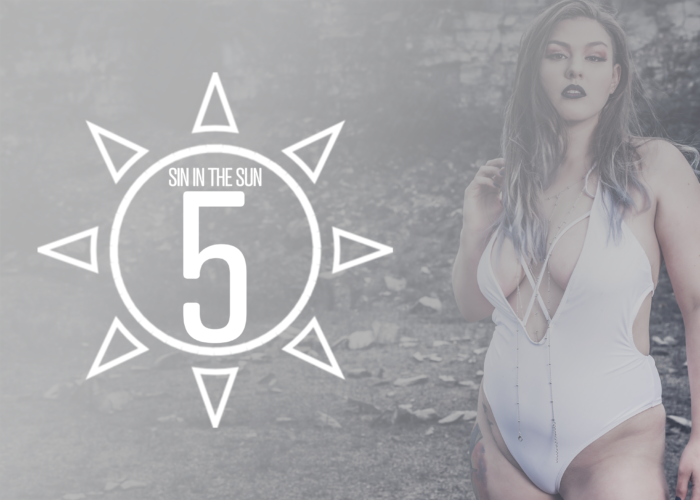 Five years ago, while looking through a fashion magazine, standing in line at the grocery store, I had a thought. Why do none of these magazines show any Alternate looking people? No plus size, No tattoos, No brightly colored hair, Nothing.

Over the next few weeks I asked a few of my friends if they would wanna do a quick fashion shoot in my least favorite weather (The HOT sun) and a few of them said yes. So the first SIN IN THE SUN was born.

It was a Stupid hot day around 95 degrees and ended with 711 slushies and sunburned EVERYTHING. However it was such a departure from the normal work we were producing at the time after posting the images online I was bombarded with people asking for a round 2.

After the sunburns healed and the miserable summer was over I began to think. Maybe I should do a round 2 So we decided that I would try another one on the 1 year anniversary of the first shoot.

While as far as views went the second round did not do as well as the first and we had some serious equipment malfunctions that day, I was contacted so many times over the next few weeks to do more. Models wanted to be apart of this project so We decided to make it an annual event.

SIN IN THE SUN 3 was a bit of a cluster with the weather and the DAMN Flies but when we posted the images online the flood gates opened. This series did so well our website crashed and ended with almost 200000 impressions in the first week.

With SIN 4 I wanted to do something a little different than the previous years and one of my beautiful model friends let us use her beautiful home. With the overwhelming number of Models volunteering to be apart of this series we had to begin a selecting from a pool.

SIN IN THE SUN 4 upon launch became the largest series we have ever produced with over 1 Million impressions over the first 7 days and complete collapse of our website it was a no brainier to do number 5.

Now that the brief history lesson is over with on to why you are here!

This years SIN IN THE SUN 5 marks the 5th anniversary of this ever growing series, With 21 models this year along with addition of our first Male model. We adventured out to Castalia Quarry MetroPark per usual the permit department out there could not be easier to work with. We were looking for a unique landscape to create a different look for this years series like we do each year and will continue do this.

Castalia Quarry MetroPark is a strange and unusual looking place with high cliffs and large puddles. More than enough space to set up tents for gear and changing stations.

The morning of, We gathered at the studio to load gear and the weather was drizzling but it wasn’t raining to hard. So we headed out. When we arrived the rain was still pretty light. We got out to the location and set up pretty quickly just in time for the downpour.

We spent quite awhile waiting out the worst of the rain. but after looking at the radar we had a 2.5 hour block to shoot. Now that seams like a good chunk of time but here is what we were up against

Now we only had 21 show up outta the 26 confirmed that doesn’t take off much of that time. but thanks to some amazing gear and an awesome assistant Rob K we managed to shoot 21 models 2.5 looks average per model in 2.5 hours! yielding 413 edits

For the nerds GEAR USED

SOME BTS BEFORE THE REVILE

Without further a due SIN IN THE SUN 5

And a proper send off in true B7P style

Nature is so powerful, so strong. Capturing its essence is not easy - your work becomes a dance with light and the weather. It takes you to a place within yourself. Annie Leibovitz Last ye

At the beginning of this year Blind 7 photography was invited to an event in Racine WI, at the Unplugged artistic event planning and studios by our lovely friend Evie. While we were there we had the

At the beginning of 2019 we set out to make a documentary about wolf conservation, And while most of the plans fell through due to scheduling and it being our first time trying to plan someth

Five years ago, while looking through a fashion magazine, standing in line at the grocery store, I had a thought. Why do none of these magazines show any Alternate looking people? No plus size, No ta