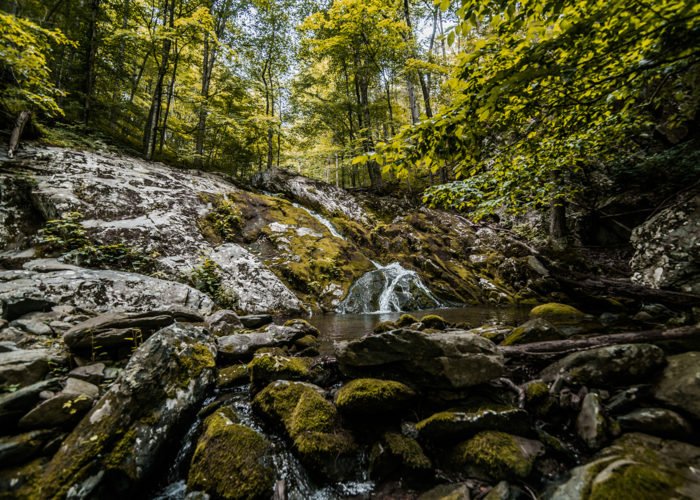 At the beginning of 2019 we set out to make a documentary about wolf conservation, And while most of the plans fell through due to scheduling and it being our first time trying to plan something of this magnitude. We did however manage to make some unique connections. The first part of the Documentary ended up being our project “FENRIR” that launched a few days ago. The second was a bit of a different situation.

While doing research for people working in the wolf conservation feild someone suggested we look into the “Mountain MAN” of virgina, at Rainbow Mountain Wildlife sanctuary. After doing some looking online we found their Facebook page and reached out.

While we began our interactions in February being all the way in VA we had to plan out the trip and with them being located at the top of a mountain in the blue ridge mountains weather became a bit of a factor. So we made the choice to plan for mid June 2019. We started by creating a list of things we would need (besides the usual gear to film and photograph with) As I love to shoot outdoors I still have not camped since I was a kid. Rainbow MTN offers a free campground along the river’s edge so that saves us some money. Now to find a tent and a rental car.

Since this was a self funded project money was very tight. My father was nice enough to loan us a tent now just to figure out the rental car. As the shoot approached we realized we were quite short on funds so we reached out to a few local businesses to see if any would like to sponsor the trip. Lucky Justin Bryant from JUSTINK’D tattoos took some time to listen to the idea and was on board. We got a really good deal through “DOLLAR rental car” for a SUV and we were set.

The morning we were leaving Myself and my assistant Jessica “mouse” Breaux loaded up the SUV and set off at 9:00 am. The trip was supposed to take us till 7:00 pm to arrive, Everything was smooth sailing till we reached the mountain and this is where technology failed us. The GPS took us up the mountain and about 1/3rd of the way up we lost GPS service. So we went back down a mile or so and downloaded the route. All fixed you would think but no nothing in life worth having can be that easy.

We followed the map towards the GPS marker for Rainbow MNT WLS. We were on paved roads for most of the trip up the mountain. Then the map shows us to take a left onto a dirt road. Not a surprise as I knew this was off the beaten path. As we traveled down this one lane road that is the same width as the SUV we have a mountain on our left so close I had to fold in the side mirror, and on our right was a steep drop off to a river. While absolutely gorgeous it was a little nerve racking. We took this road for about 2 miles to the GPS marker. But when we arrived at the marker it was more of the same Mountain on one side and a river on the other. So we kept on driving figuring maybe the driveway was a little further down. We were very wrong, By this point it’s about 7:00 pm as we made pretty good time and should have arrived a little early.

After continuing down the road for about a mile we ran across some houses but nothing with the sign/address we were looking for. So we proceeded to drive up and down back and forth each time going just a little bit farther down this long winding road. FINALLY at about 9:00 pm we decided to take the road till it ended by this time it’s now dark and this is no city dark this is MILES from civilisation dark. You could see the stars through the thick tree canopy and hear the river rushing alongside the car. Then we heard the glorious howls from a pack of wolves; it was music to our ears and absolutely haunting. We knew we were close at this point so we just kept going and sure enough as we rounded a bend in the road our headlights shined upon the Rainbow Mountain sign.

As we pulled into the driveway we could see many little glowing eyes in the distance and the howls got louder and louder. Then out of the darkness a stirn looking man with a long white beard appeared. “Welcome to rainbow mountain though you folks were not coming” he exclaimed with such hospitality. He then showed us down to the campground.

There are about 4-5 campsites along the river as we made our way to the last one we passed other campers. Once we got to the site we started to set up camp (in the dark mind you which is never fun.) It was only then that Jess and I realized the “tent” my father had loaned us was an old tension tent. Neither myself nor Jess knew how to set one of these types of tents up. So we gave it a try and were failing miserably so we split the tasks and one of us worked on the tent while the other worked on getting a fire started. It had rained the day before so all the fire wood was wet making it even harder to get a fire going. The other campers (much more experienced than us) saw we were having issues and well all of them came to help. The one group of 6 worked on the tent and 3 helped with the fire we were set in just a few minutes. Jess and I tossed some hotdogs on the fire and sat back to enjoy some dinner and nature.

The next morning we woke up just after sunrise. I was astounded by my surroundings. It was absolutely beautiful, what we couldn’t see in the dark was the river was about 15 feet from our campsite. It was amazing! We took a walk down to a little area by the river and met with another camper who was there with her horse. She was traveling via horseback to draw landscapes, while we were chatting with her the campers that “saved us from sleeping outside with no fire” the night before, came down to the river for a morning swim.  Everyone was super friendly and very accommodating. After a little while we decided to take a trip down the mountain to make some phone calls and grab a few more supplies from a local store.

When we returned (now knowing how to get there) we set up the gear and headed over to the main property. Where we met with Jeff and his daughter as they showed us around to meet the pack and the rest of the animals around the property. Once we had a good lay of the land we chose a location to do a quick interview. We spent the rest of the day filming B-roll and hanging out with the wolves. There is nothing quite like hanging out with a pack of these beautiful animals. As the sun began to set we headed back to our campsite and prepared some dinner. While that was cooking Jess and myself did an impromptu shoot and then I shot some more landscape shots. After dinner Jeff, his daughter, and all the other campers joined around our fire for a nice long hang out and chat.

The next morning we woke up and packed up everything. We met with Jeff again to say goodbye and used that time to film a little more B-roll. About mid afternoon we began the journey home making plenty of stops to shoot random landscapes and nature.

Spending a few days at Rainbow Mountain was a life changing event, Getting away from the hussle and bussle of city life, being able to get away from it all with no cell phones no internet no police sirens or traffic really hit reset on my mental stability. Jeff and his family are truly one of a kind and I highly recommend contacting him to set up a time for you to take a trip to his 100 acre woods. While the wolves were what drew us there. The location is just breathtaking. Rivers, forests, animals, and just a few friendly faces make this trip so worth it.

Five years ago, while looking through a fashion magazine, standing in line at the grocery store, I had a thought. Why do none of these magazines show any Alternate looking people? No plus size, No ta

Nature is so powerful, so strong. Capturing its essence is not easy - your work becomes a dance with light and the weather. It takes you to a place within yourself. Annie Leibovitz Last ye

At the beginning of 2019 we set out to make a documentary about wolf conservation, And while most of the plans fell through due to scheduling and it being our first time trying to plan someth

At the beginning of this year Blind 7 photography was invited to an event in Racine WI, at the Unplugged artistic event planning and studios by our lovely friend Evie. While we were there we had the